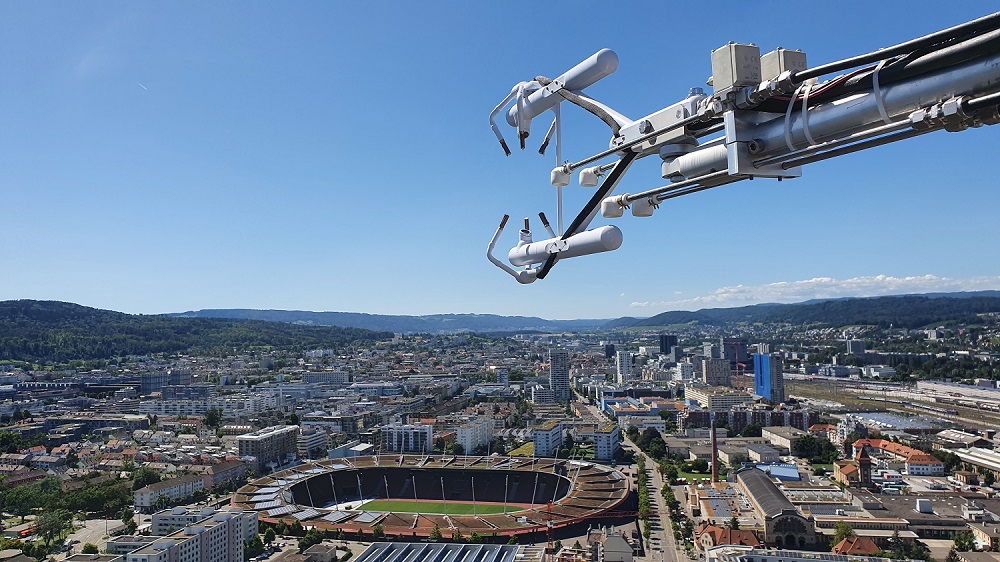 The ICOS Cities project aims to develop tools for systematic observations to monitor the level of greenhouse gas emissions in urban areas. As part of the project two major system installations were successfully finalised on a tall tower in Zurich (Hardau II), Switzerland, earlier this month. It is expected that these measurement systems will result in precise attribution of carbon dioxide emissions in an urban area.

The 4-year ICOS Cities (PAUL – Pilot Applications in Urban Landscapes) project aims to develop tools and provide data for cities to execute their climate action plans with urban areas contributing to a large share of fuel emissions on both global and European levels. The installation of two major observation systems was finalised this July in Zurich, one of the pilot cities chosen for the project.

“The city of Zurich has a long tradition of targets and measures to reduce its energy consumption and CO₂ emissions, and the corresponding action plans must be supported by observations. This is perfectly in line with the objectives of ICOS Cities”, says ICOS Cities project work package leader Dr. Lukas Emmenegger, Head of Laboratory at EMPA.

To support the project and the city’s climate action plan, an eddy covariance system and a Relaxed Eddy Accumulation (REA) sampler were made operational on the tall tower of Zurich (Hardau II).

The installation process was carefully planned and tested at the rooftop of the Department of Environmental Sciences at the University of Basel before the work began on-site in Hardau II. The installation went smoothly, but some minor problems appeared on the way as some site-specific practical details could not be foreseen until the installation team arrived on-site, and specifically on top of the mast.

The installation process lasted for three full days, and first data have already been collected.

The eddy covariance system, operated by the University of Basel, measures CO₂ emissions continuously using a sensor that combines vertical wind with a gas analyser. It measures 20 times per second and essentially tracks each individual plume from the city emissions with enriched greenhouse gas concentrations and each gust with cleaner air from above.  As only the net flux is measured with the eddy covariance system, it does not separate emission sources.

Because of this, a REA sampler operated jointly by the Universities of Heidelberg and Freiburg, and by the Max Planck Institute (MPI) for Biogeochemistry in Jena was installed alongside the eddy covariance system. REA is a more sophisticated approach in measuring isotopes and co-emitted species separated by vertical wind. For short time periods, air is sampled according to whether it comes from the city below or the atmosphere above in two different samples.

The eddy covariance system will measure total CO₂ emissions in the centre of Zurich for the next two years. The REA sampler will run at the same location for half a year so that the changes in emissions between seasons can be monitored in addition to accounting for the changing vegetation state within the city.

The expected results will show the magnitude and timing of greenhouse gas emissions in Zurich on the scale of minutes to seasons. The aim is to differentiate rush hour emissions from other times of the day as well as between weekdays and weekends, and seasonal differences.

"With these systems we will measure carbon dioxide emissions that are emitted from the central part of the city of Zurich into the atmosphere. We hope to use this equipment to attribute CO₂ emissions to different sectors - separating between CO₂ emissions from traffic, industry and building energy, and respiration of soils and humans. We also hope to quantify the uptake of CO₂ by urban vegetation”, says ICOS Cities WP leader Prof. Dr. Andreas Christen from the University of Freiburg.