Skip to main content
ICOS at the EGU General Assembly 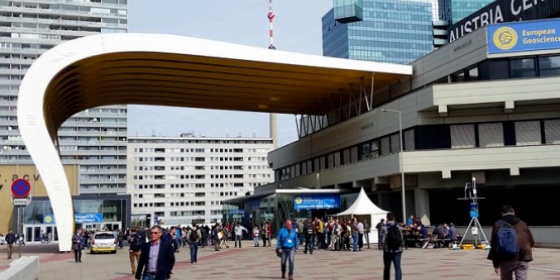 This year's European Geosciences Union General Assembly has been held in Vienna from 12 to 17 April and it brought together almost 12,000 geoscientists from all over the world into one meeting covering all disciplines of the Earth, planetary and space sciences.

ICOS RI representatives at the EGU General Assembly 2015 used the opportunity to present new ENVRIplus project which will be launched in May this year.

In the EGU splinter meeting with about 35 participants this upcoming H2020 cluster project was presented by its coordinator Werner Kutsch, Director General of ICOS. Many of the participants took this opportunity to discuss the future work and the best ways to make ENVRIplus really beneficial for the participating Research Infrastructures.

There were also many interesting scientific presentations based on ICOS-like data in the Atmospheric, Bio-geosciences and Ocean Science sections. Several sessions also focused on Research Infrastructures showing recent efforts of existing infrastructures or new initiatives on upcoming research areas that might result in future infrastructures or be taken up by existing ones.

According to the EGU organizers, the conference was attended by scientists from 108 countries. The next EGU General Assembly is scheduled for 17 to 22 April 2016 in Vienna.