Integrated Carbon Observation System, ICOS, is the first to release results of a scientific study that shows a large reduction in carbon dioxide (CO2) emissions in seven European cities during the lockdown caused by the Covid-19 virus. The study is conducted by ICOS ecosystem scientists together with colleagues around Europe.

The Covid-19 related restrictions have forced many of us to stay at home. This has strongly reduced road traffic and economic activities particularly in cities and urban areas where majority of the people live. Consequently, this has also cut down human-induced carbon dioxide (CO2) emissions to the atmosphere.

Although this reduction is not strong enough to be globally visible in the atmosphere  (e.g. see ICOS news), at local scale the changes in emissions can be observed.

The study, which is currently being prepared for peer-review, shows that lockdown has so far reduced carbon dioxide emissions at all cities participating the study. “The reductions range from 8% in a highly vegetated urban area of Berlin, Germany, to 75% in the city centre of Heraklion in Greece, “says Professor Dario Papale, Director of the ICOS Ecosystem Thematic Centre.

The European cities included in the study are Basel in Switzerland, Berlin in Germany, Florence and Pesaro in Italy, Helsinki in Finland, Heraklion in Greece and London in the UK. The size of reduction varied due to the characteristics of the sampled areas and the stringency of the lockdown restrictions in place. In all cities, there was a clear temporal connection with the restrictions and the emission reduction.

For the local observations, the scientists globally use a technique called eddy covariance, in which the exchange of carbon dioxide between the atmosphere and a particular ecosystem is being measured by equipment installed in towers topping over the area and its vegetation. This allows to see the changes in nearly real-time.

Traffic, vegetation as well as economic and domestic activities affect the reduction

The tower in Heraklion observed the largest reduction, since it is in an area characterized by dense commercial activities and intense road traffic, both of which were completely stopped during the lockdown. In Pesaro, the almost full stop of all traffic reduced the CO2 emissions up to one third of the normal amount. In other cities, such as in Florence, in Basel and in Helsinki, the emissions are a combination of reduced traffic and economic activities, while increased domestic heating and human metabolism partly counterbalance the reduction. In the Basel-B location, however, the traffic is twofold in respect to the Basel-K and for this reason the reduction is larger.

Traffic and the commercial sector cause also a large part of London’s emissions – but London differs from Helsinki and Florence due to is residential contribution: normally, the weekday population in daytime central London can increase 10-fold due to the influx of commuters. This was decreased strongly with lockdown.

In Berlin, the moderate reduction in traffic has been counterbalanced by domestic emissions and the presence of vegetation, leading to relatively small fluxes.

The connection of lockdown-measures to the emissions and the connected timing can be clearly seen from the figure below.

“In some cases (Florence, London and Heraklion) emissions began decreasing even some time before the official lockdown was implemented, when people responded to recommendations to reduce travel and work from home as much as possible,” Dario Papale points out. 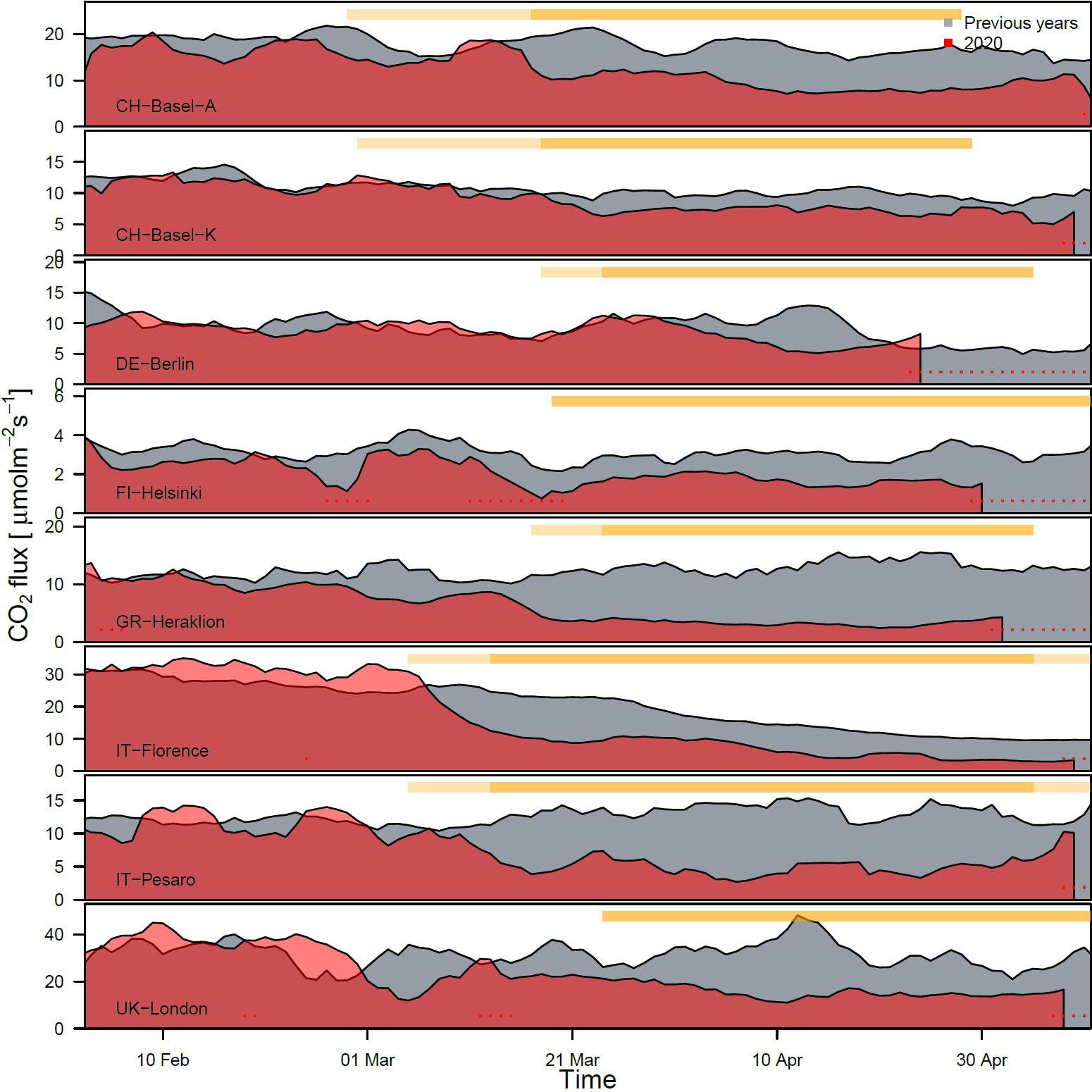 Dario Papale says that “This is a great example of collaboration among scientists in different countries, which is supported by local authorities who allow us to collect these important measurements. Flux measurements will be very important for monitoring the emission patterns in the coming weeks and months, when private cars will possibly be preferred to public transports to avoid crowds. This might cause a fast growth of emissions that may even exceed those of the pre-lockdown period.”

The scientists aim to make further studies based on the data generated from these city towers. While this early analysis paves the way for more in-depth studies, it already shows the importance of having observation towers also in the urban areas. This significance of cities will also grow in the future: already today, some 55% of world’s population live in cities, and according to United Nations, the percentage will grow considerably over the coming decades.

Original article is written by:

Stavros Stagakis and Nektarios Chrysoulakis, Foundation for Research and Technology Hellas FORTH