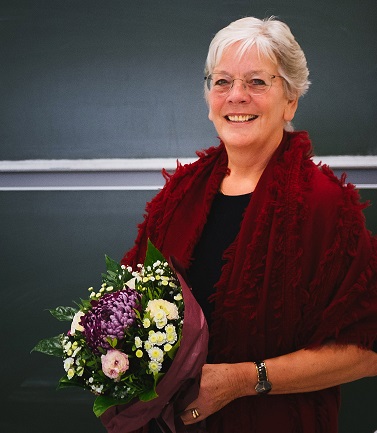 Congratulations to Dr Ingeborg Levin on an extraordinary achievement, with news that she will receive the Alfred Wegener Medal and Honorary Membership of the European Geosciences Union in May 2020.

The prestigious award acknowledges Dr Levin’s integral role in developing the field of environmental physics. It also celebrates the significant contribution she has made in the study of carbon emissions and in tracing radiocarbon (14C), which has led to worldwide recognition of the impact fossil fuels have on the climate system.

The EGU says the medal, “is bestowed to scientists who have achieved exceptional international standing in atmospheric, hydrological or ocean sciences, defined in their widest senses, for their merit and their scientific achievements.”

In Dr Levin’s words though, she “is not a prototype of a scientist.” As a child Dr Levin loved gardening and working with her hands in her father’s workshop making furniture, with no desire to pursue a career in science. An affinity towards physics led her to consider becoming a teacher and so she began study in this area at university.

During her undergraduate diploma studies Dr Levin came to two life-defining conclusions; firstly that she had a passion for environmental physics, and secondly that she didn’t want to spend every day at school teaching the same subjects. A conversation with a head hunter galvanized Dr Levin’s path, giving her the opportunity to undertake her thesis at the newly established Institute of Environmental Physics at Heidelberg University, where she conducted measurements of 14C in the surroundings of nuclear power plants. This entailed long-term monitoring and measurement of 14C in Heidelberg and at stations close to these nuclear installations.

Under the supervision of Karl Otto Münnich, Dr Levin followed on with a groundbreaking PhD thesis exploring the first estimates on how Radon could be applied as a tracer to estimate fluxes of CO2. She then gained a place at the same institute at Heidelberg University, where she has held a permanent post ever since. The combination of an unlimited contract and ultimately a position created for her, as the value of CO2 and other long-lived greenhouse gases (GHGs) such as CH4, N2O and SF6 as a topic grew, meant that Dr Levin could explore with freedom the natural and anthropogenic sources and sinks of GHGs - on both a regional and a global scale. It allowed long-term monitoring, yet Dr Levin has also had the dual responsibility of securing research funding.

No doubt both this practical and academic approach has helped in setting up ICOS, behind which Dr Levin has been one of the driving forces. The ICOS argument for standardized carbon and other GHGs measurement is aligned with her own research, as long-term integrated in situ atmospheric monitoring is ultimate proof of potential changes in ecosystem and man-made fluxes.

“Only now do politicians realise they need some ground truth, for example checking satellite images or carbon accounting based on statistical data, otherwise they lose reliability.”

As the first female nominee for the Alfred Wegener Medal since 1999, and only the second female nominee since the award’s inception, it’s clear that Dr Levin’s accomplishment needs to be seen in the context of a male dominated space. She strongly believes in the importance of different perspectives, both male and female, and has actively lobbied to boost female participation in the professorate of the Department of Physics and Astronomy at Heidelberg University.

However Dr Levin is quick to point out that fundamental factors for anyone to succeed at a career in science include a supportive boss and people who give you confidence in your ability. Two mentors she attributes as being particularly influential in her life have been her husband, also a scientist, and Karl Otto Münnich, whom she describes as a brilliant thinker who not only gave her liberty to pursue her ideas, but valued them as being equal to his own because he functioned in a non-hierarchical way.

It is in this spirit that Dr Levin tells of her reaction to hearing her announcement for the Alfred Wegener Medal 2020,

“I have not expected something like this after retirement. It is a real big acknowledgement of my lifelong work and it’s satisfying because I have put a lot of heart into science.”

Having received the news, colleagues and students from the Institute of Environmental Physics celebrated Dr Levin’s achievement in a special seminar event, sharing in a sparkling wine to toast a singular scientist.