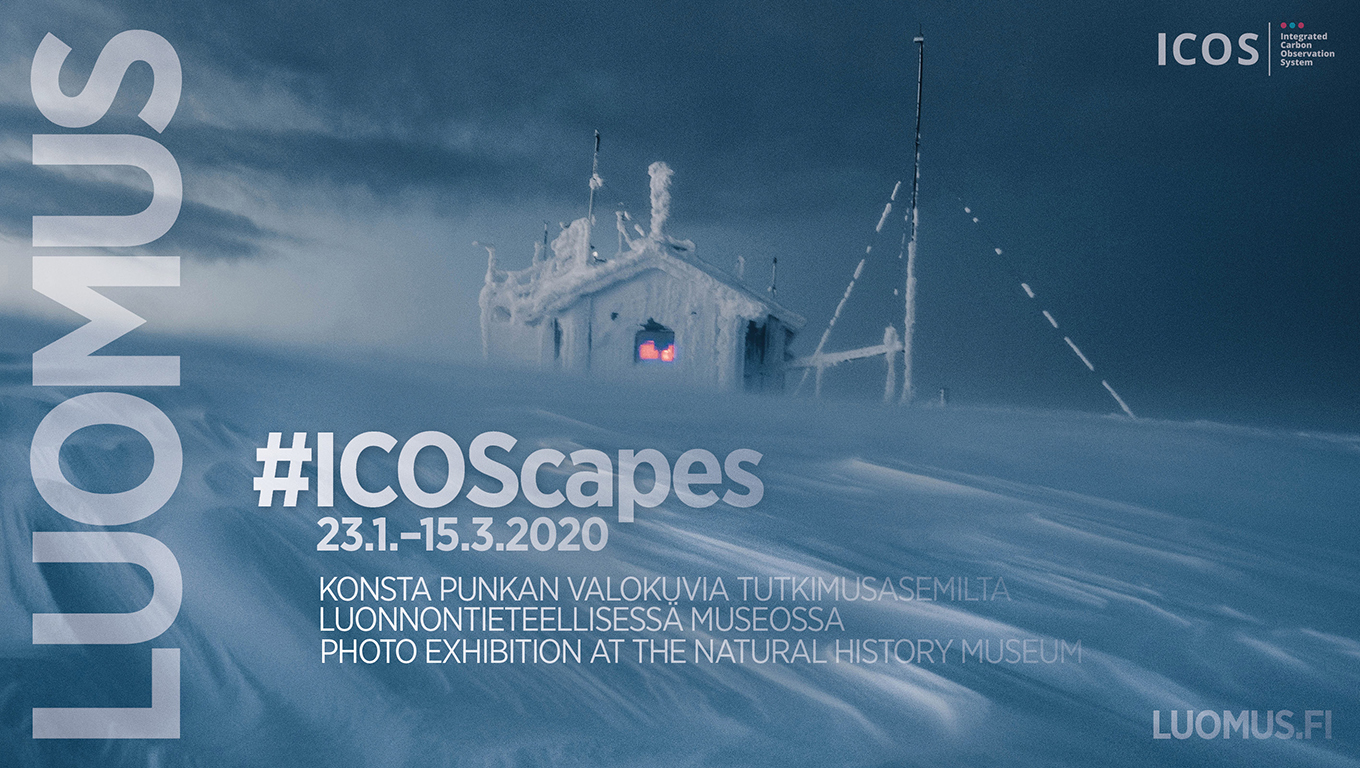 Is it possible to make an impact through photographs? Yes it is, answers Konsta Punkka, a well-known nature and wildlife photographer, who uses his skills for communicating about climate change. Punkka has taken a set of stunning photos for the #ICOScapes Photo Exhibition, which opens on the 23rd of January at the Finnish Museum of Natural History in Helsinki.

The photographs and videos of the #ICOScapes exhibition highlight unique environments across Europe, where scientists work at ICOS greenhouse gas measurement stations.  Observing the level of greenhouse gases is essential for predicting climate change and mitigating its consequences. Data from observations are used both for research and for the international policy making.

The photographs tell about the life of scientists when they do their studies, and also about the climate change.

“Through these photos, we can tell about the everyday life of scientists, and of their persistent, years-long work required before any research results can be published,” says Katri Ahlgren, Head of Communications at ICOS.

”ICOS is a scientific community, and we want to bring the voice of the scientists to the general discussion, and raise awareness on climate change,” she continues.  The acronym ICOS is shortened from the name of the infrastructure: Integrated Carbon Observation System.

Photographer Konsta Punkka travelled to ICOS greenhouse gas measurement sites in 12 European countries. Photos are taken between August 2017 and August 2018. From the hundreds of photographs, 24 pictures from 12 locations were selected to the exhibition.

For Konsta Punkka, photographing is his way to defend nature.

– I want to show what kind of unique places and animals there are in the world. Through my photographs, I want to tell people that they should protect nature, animals, and life on this planet in general.

According to Punkka, working with the ICOS scientists was special, because of their close connection to climate and nature.

–  It is great that I can tell this story on how scientists work for the climate and for the nature; what kind of stuff they do in practise, and in what kind of environments. Usually outsiders don’t see that, which makes it very interesting.

Measuring greenhouse gases accurately require cooperation between the countries. Hence, 12 European countries have established a joint infrastructure, ICOS, Integrated Carbon Observation System. ICOS consists of over 130 measurement stations, laboratories, data centre, and of about 500 scientists. The #ICOScapes exhibition has been produced by ICOS.

ICOS facilitates the work of scientists and speeds up the research on climate change and its consequences. Traditionally, research groups and universities in different countries have financed their own research stations, and measurement methods have varied. The scientists of the ICOS community have agreed on common ways of measuring, of collecting the data to one central portal. Now, anyone can use the ICOS Carbon Portal to download accurate data, which have been measured in same ways in tens of stations and been processed according to the strict ICOS quality standards. This makes it possible to gain new knowledge relatively promptly, for example, on extreme conditions related to climate change, instead of having research results after several years or even after a decade.

”Greenhouse gases are transported in in the atmosphere for hundreds or even thousands of kilometres. When measuring in exactly same way both close to the Polish coal power plants and in tundra in clean Finnish Lapland, we can have comparable information regarding the sinks and sources of greenhouse gases as well as on local conditions”, says professor Annalea Lohila of Finnish Meteorological Institute and University of Helsinki.

The #ICOScapes Photo Exhibition at the Kimnaasi hall at the Finnish Natural History Museum from 23rd January to 15th March 2020. Visit to the photo exhibition is included in the museum’s entrance fee.