ICOS presented future plans at the Observing the Horizon event 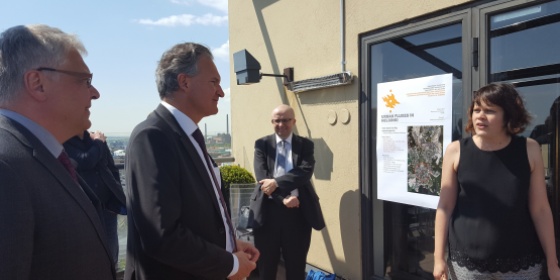 As part of his official visit to Finland this week, the European Commission Director-General of the Directorate-General for Research and Innovation Robert-Jan Smits met on Wednesday, 25. May 2016 with the representatives of the pan-European Integrated Carbon Observation System at hotel Torni in Helsinki.

Helsinki based ICOS ERIC European Head Office has organised this event entitled Observing the Horizon in order to present ICOS future plans for supporting Paris climate agreement with the emphasis on the necessity of a science-based carbon observation system that will enable a detailed knowledge base in order to support and verify future global mitigation and adaptation climate change processes.

During the event ICOS Director General Werner Kutsch has talked about ICOS ambition to further develop and become the European pillar of a global in-situ carbon and greenhouse gas observations and provide a repository service for higher integrated knowledge. "ICOS has been designed primarily to observe the natural background carbon fluxes. However, we already started a development to include also the anthropogenic carbon emissions, especially in the urban areas and our aim is to develop scientific and technological readiness during our final implementation later this year ahead of the next UN COP22 meeting in Morocco,” said ICOS DG Werner Kutsch.

The backbones of ICOS RI are the national networks consisting of atmospheric and ecosystem stations across Europe and marine stations covering North Atlantic and European seas. At the moment there are more than 100 ICOS RI stations in 11 member and observer countries. First GHG measurement stations in the ICOS European network are expected to be labelled and operational in summer 2016. The current challenges of ICOS beyond becoming fully operational is to increase its geographical coverage and the number of participating countries.

Robert-Jan Smits, Director-General for Research and Innovation of the European Commission, said:

"ICOS has made impressive progress on the way to become fully operational since the Commission granted it the legal status of European Research Infrastructure six months ago. This is good news, since it will provide scientific data on carbon emissions and trends that should underpin the necessary mitigation activities against climate change."

Mr. Smits also emphasized important role that ICOS, as environmental research infrastructure, has in the context of the COP21 agreement implementation. ICOS is planning to prepare itself strategically for the future observational demands that will come from UNFCCC and for close cooperation with international bodies such as WMO, UNEP, IPCC, GCOS, and GEO on a political and practical level. In order to achieve that, the cooperation with COPERNICUS and European Environmental Agency (EEA) has to be deepened and further explored.

The event at hotel Torni was also attended by the representatives of the Finnish Ministry of Education and Culture as well as Academy of Finland, University of Helsinki and Finnish Meteorological Institute and included greenhouse gas measurement demonstrations and presentations on the carbon emissions in the urban areas by Dr. Leena Järvi from the University of Helsinki and monitoring fossil fuel CO2 in the continental and global atmosphere by the Prof. Dr. Ingeborg Levin from the ICOS Central Analytical Laboratories in Germany.