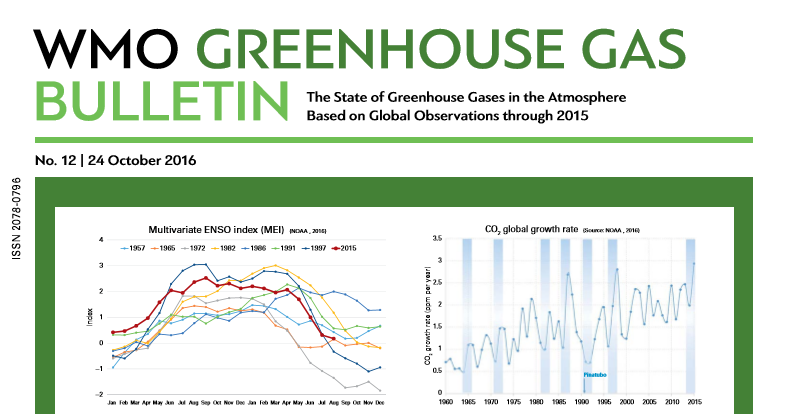 On 24th October 2016 World Meteorological Organization (WMO) released the 12th yearly update of its bulletin on the state of Greenhouse Gases in the atmosphere and ICOS scientists contributed important parts to this bulletin including Global Atmosphere Watch (GAW) GHG SAG activities. The WMO GAW network is a global network to which also ICOS stations are contributing their atmospheric observations. The main finding is that the growth of greenhouse gases in the atmosphere is still accelerating for all the major greenhouse gases (CO2, CH4 and N2O), because of human caused emissions. In 2015 we witnessed a particularly strong increase in CO2 due to the natural phenomenon El Nino, the first large one since 1997.  2016 will be the first year where CO2 abundances at the famous Mauna Loa station will not get below 400 ppm, and they won’t go below this level any more for centuries to come. Upon publishing WMO Greenhouse Gas Bulletin for 2015, the WMO Secretary General Petteri Taalas stressed the importance of mitigation: “It is therefore of the utmost importance that the that the Paris agreement does indeed enter into force well ahead of schedule on 4th November and that we fast-track its implementation.”

Networks like the global WMO GAW network and ICOS will allow to continuingly monitor global progress in greenhouse gas emission mitigation and the feedback with natural emissions of climate change.

Read some of the press coverage on WMO Greenhouse Gas Bulletin here.