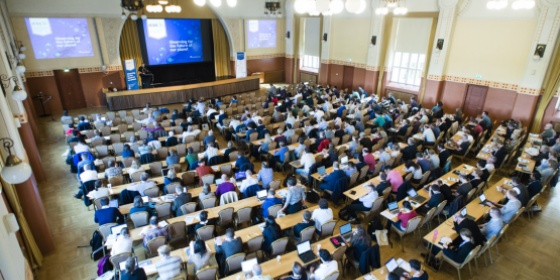 The Conference was first held in 2014 to provide an arena for environmental scientists to discuss timely topics on greenhouse gases research.

Over 250 scientists and exhibitors from all over the world attended 2016 Conference held in Paasitorni congress centre in Helsinki.

Conference also introduced a new ‘Communicating Climate’ session to address some of the main challenges of effective environmental and climate communication. In his keynote presentation Mark Meisner, the Executive Director of the International Environmental Communication Association (IECA), reminded how people need to feel that they are making a difference and their actions have an impact. “Thus, communicators need to encourage public to care and make them feel empowered to act for climate change,” said Mark Meisner.

Director of Global Monitoring at NOAA’s Earth System Research Laboratory (NOAA/ESRL), Jim Butler, acclaimed COP21 as a large step forward and raised a question on how to inform society and create a sense of urgency while we are heading for 3 Celsius global warming.

One of the keynote speakers at the 2nd ICOS Science Conference was Han Dolman, a Professor of Ecohydrology at the Department of Earth Sciences at the Free University Amsterdam, who reminded that we need to refocus better to be able to detect reductions in fossil fuel emissions after the Paris agreement. According to him, “ICOS has made great progress and come a long way from the days when an integrated system was only an idea.”

Associate Professor at the California Institute of Technology and a Research Scientist at the Jet Propulsion Laboratory, Christian Frankenberg, showed results on an airborne campaign and analysis, which revealed that more than 250 individual methane plumes and inferred fluxes follow a lognormal distribution, with the top 10 percentage emitters contributing more than half to the inferred total point source flux of about 0.3 Tg/y.

Opening talk at the 2nd ICOS Science Conference was held by the professor Annikki Mäkelä from University of Helsinki, who underlined the importance for long-term data and immediate measurements needed for testing hypotheses and developing models of forest function. Prof Mäkelä pointed out that is more difficult to understand and quantify climate change impacts on forests than was expected 20–30 years ago.

Conference also included an Early Career Scientists workshop which was organized to discuss about academic career planning for junior researchers in environmental sciences and highlighted importance of outreach, networking and sharing.

Next, 3rd ICOS Science Conference will be held in 2018 in a location that is yet to be decided on.