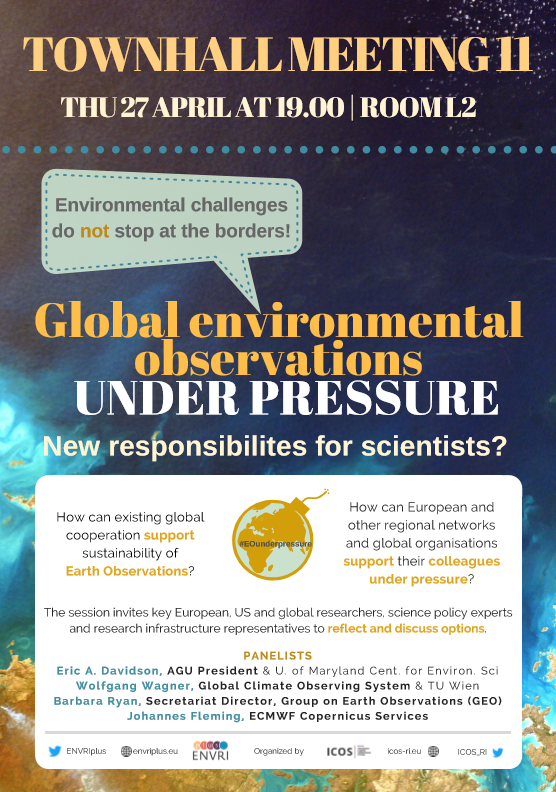 The Townhall meeting was organized in a light of recently announced radical cuts in the environmental research budgets in traditionally strong centres for environmental observations, particularly in the United States and Australia that might lead to unpredictable impact on global cooperation and coverage of Earth Observations.

The event discussed urgent questions on how European and other regional networks as well as global organisations can support their colleagues under pressure and take the leadership in order to minimise damage on our understanding of the Earth system and global environmental changes.

Moreover, topic of the global environmental observations and this EGU 2017 Townhall event were also recently featured in the prominent ‘Nature’ scientific journal. The article titled ‘Politics: Turbulence Ahead’  by Julia Rosen included interviews with ICOS ERIC Director General Werner Kutsch and ENVRIplus Project Director Ari Asmi who emphasized global nature of the environmental science and related problems. ‘If you are suddenly losing pieces of the global observation network, it affects everything,’ said Ari Asmi.

This ‘Nature’ article concludes on a positive note with ICOS DG’s message to the early career scientists, advising them ‘to find a way to hold on until the pendulum swings back in the other direction’. ‘A presidential term is much shorter than a scientific career. There will be other presidents coming and, with them, new opportunities,’ concluded Werner Kutsch in the ‘Nature’ journal.