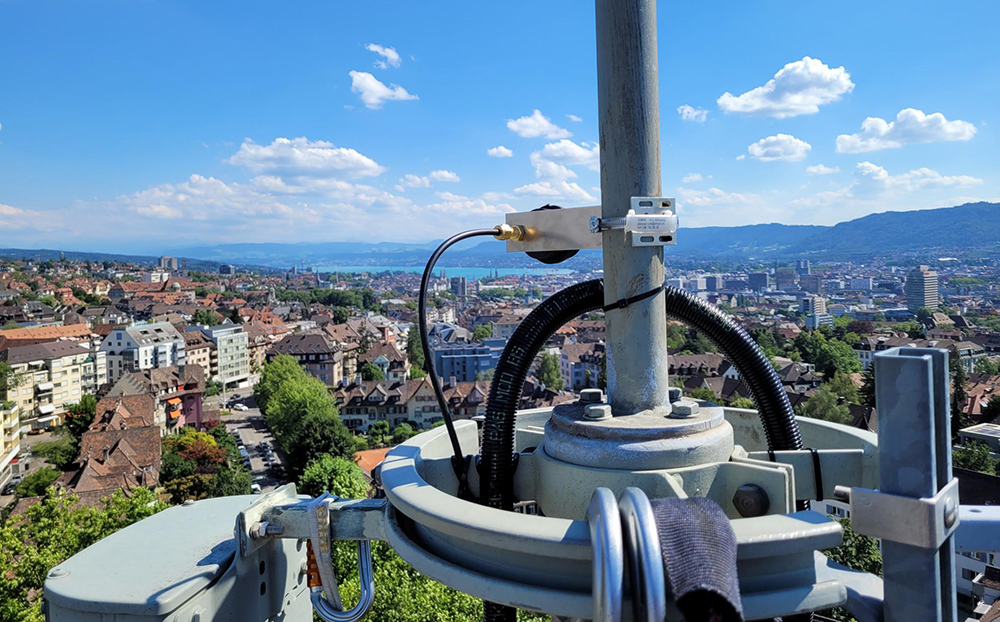 Alongside carbon dioxide (CO2) and radiocarbon, the measurements are including several co-emitted species. The dataset is allowing the research team to continuously determine emission flux ratios, learn how they change over time and with different wind directions. Patterns can be detected related to the mix between fossil fuel emission sources such as heating and traffic, as well as biogenic fluxes.

“In our eddy covariance results we have seen interesting CO2 flux patterns both seasonally and spatially. The heterogeneity in terms of urban CO2 sources and sinks is intense. As expected, the highest CO2 emissions are found during daytime and from the city centre, while the parts of the city that have vast greenspaces and trees show lower CO2 emissions, particularly in summer,” says Postdoctoral Researcher Stavros Stagakis.

In the first measurement results, the research team were surprised to see a significant effect of the biogenic components (biogenic carbon is the carbon stored in biological materials, such as plants or soil).

“Before the onset of the building heating emissions in autumn, our measurements indicated very low CO2 fluxes, even negative in some cases. Also, the CO2 diurnal patterns were very different to the co-emitted species (e.g. CO, NOx). During times with ample sunlight, ratios of CO and CO2 were higher than any known fossil fuel source ratios. This all indicates that photosynthesis, and hence biogenic fluxes, are a major contributor to the measured CO2 fluxes, especially during summer months,” says Andreas Christen, Professor in Environmental Meteorology and ICOS Cities WP 3 leader.

The major scientific challenge has been identifying the optimal sampling strategy for the radiocarbon fluxes. Because of its low abundance, radiocarbon cannot be measured in-situ. Instead, a relaxed eddy accumulation (REA) approach is used to grab samples which are subsequently analysed by an Accelerator Mass Spectrometry (AMS).

“In the REA approach, we sample air separated by up- and downwind according to the sonic anemometer. Samples are accumulated in a modified flask sampler built by the ICOS Flask and Calibration Laboratory. Successful pairs of samples are then sent for analysis. Due to the measurement uncertainties of radiocarbon, a certain difference in fossil fuel CO2 between the two samples in a pair is required to calculate fluxes. However, this difference is not easy to predict before you start a sampling sequence,” explains Samuel Hammer, Head of the ICOS Central Radiocarbon Laboratory.

“It required strong collaboration and real-time data exchange between different groups with different expertise to establish and refine the techniques and the workflow for the flask sampling in REA mode. I believe what we have achieved so far is very promising, but new questions and challenges will appear along the way,” Andreas Christen adds.

The combination of multiple instruments and methodologies for urban emission measurements has been tested for the first time in the Zurich observatory.

“Especially, the radiocarbon fluxes estimation through REA is novel and challenging. So far, we have learned how to communicate, combine and share data from the different measurement systems and data streams. The first results show that during the periods with net CO2 uptake, we can still detect a positive fuel CO2 flux from the city. This takes us much closer to the goal of separating the biogenic and anthropogenic CO2 fluxes in cities,” Samuel Hammer concludes.

The ICOS Cities mid- and low-cost CO2 sensor network in Zurich has also been up and running since mid-July 2022. The data capture rate has been good, generally over 90 % and the CO2 mean is currently 444 ppm. There are 21 mid-cost sensor locations, generally on rooftops, in Zurich:

“The sites' means between the background and urban-roadside sites differ by 31 ppm and this suggests that the sensor network is characterising Zurich's urban enhancement well,” says Stuart Grange, Data Lead for Zürich's low- and mid-cost sensor network.

The network experienced its highest concentrations during an episode between October 28 and 31 where cooler temperatures and a lack of wind combined to increase ambient CO2 concentrations. As of the beginning of January 2023, 20 of the 21 mid-cost sensor locations now have on-site wind observations available.

“The addition of wind sensors has opened up a number of analysis options and is proving to be very useful in identifying the conditions that can lead to local contamination from nearby building heating stacks,” says Grange.

The Zurich team is now working on how to analyse the observations collected from the 56 low-cost sensor sites.

“The low-cost sensors from the Munich team have been in our climate chamber undergoing extensive characterisation before being moved to a field co-location. The Zurich and Munich teams have exchanged the data processing code and knowledge transfer around this work will continue. Also, the three sensor teams in Zurich, Munich, and Paris, will finalise an interim data specification before the end of the year to allow for easy data sharing among data users,” Grange concludes.

The full set of measurements will continue until spring 2023 in Zurich. Then, the multi-species gas analyser and the radiocarbon flask sampler will leave Zurich and go to the Paris tall tower site for its next deployment. In Zurich, the measurements at Hardau will continue as a single open-path analyser providing CO2 fluxes over the next 1,5 years. The data-flow into the ICOS Carbon Portal will also be integrated, so fluxes are not post-processed individually and manually by scientists, but instead will be automatically calculated in near real-time by ICOS Ecosystem Thematic Centre.