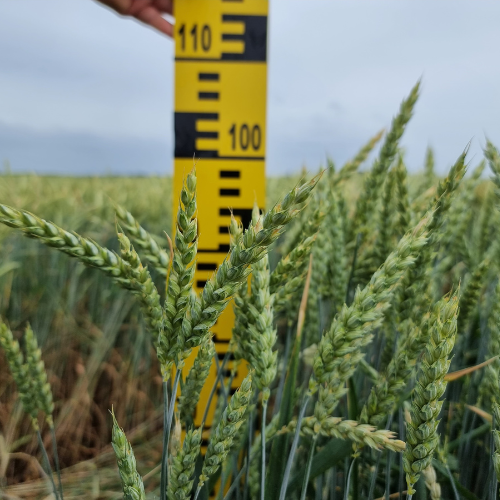 The ICOS ecosystem station Gebesee in Germany collects important data on the carbon cycle of agricultural land in Europe. When the crops change every year, so do the fieldwork methods. How does the station personnel adapt to new crops every year?

Gebesee is an ICOS ecosystem station in the Thuringian Basin of Germany. The station is surrounded by large agricultural areas which makes it perfectly situated to give insight into the carbon cycle of agricultural land in Europe. The field goes through something called crop rotation, where the type of crop changes every year. In the first year of the station’s operation after its official ICOS labelling, the farmer was growing potatoes, this summer it was winter wheat, and next summer it will be sunflowers.

“Every new crop means that we have to adjust our sampling schemes and adapt our measurement methods. It’s always a learning experience for us,” explains Jean-Pierre Delorme, State-Certified Engineer and station manager.

Communication with the farmer is one important aspect of the work. The team of researchers needs to know about the farmer’s harvesting schedules so they can plan their fieldwork accordingly.

"Farming is obviously very dependent on weather – the amount of rain and sun ­– so that means we have to communicate with the farmer to know what their plan is.”

Shortly before the farmer starts their harvesting, the team at Gebesee can start their fieldwork. The group of researchers spread out to a specific area with multiple fixed spots, and conduct a so-called destructive sampling, which is done to verify the manual recordings of the plants which were made during the growing season.

Once the plant is harvested, it needs to dry for several days in the lab, after which all the parts – the grains, stems and roots – are weighed separately to determine the dry mass before being analyzed for how much the plant has absorbed carbon. This process, called ancillary measurements, allows the group to verify the eddy covariance measurements which the station has been collecting for over two decades.

“Eddy covariance basically gives the growing status of the plants. It measures the net exchange of CO2. In spring and summer, photosynthesis outscores respiration during the day, which means we see a net CO2 uptake, i.e. how much CO2 is removed from the atmosphere. During the night, autumn, winter, or fallow periods, it is the other way around: the ecosystem is losing CO2 to the atmosphere,” Jean-Pierre explains. “The combination of these two types of measurements makes this station very valuable for understanding the relation between plant growth and CO2 exchange.”

Being part of fieldwork has been very meaningful for Amukelani Maluleke, who was part of the Gebesee field crew as part of his PhD studies. “Coming from the university you’re used to doing a lot of lab work, but you don’t really get the full picture of what happens in the field. It’s a great experience being out of the office,” he says.

One of the group's key tasks is keeping the equipment working smoothly. The crew has a remote connection from their institution in Braunschweig to the site that allows them to see how the sensors and instruments are working. To ensure data flow and high data quality, they upload the data to the ICOS Carbon Portal daily, where it’s checked internally every 24 hours.

Cleaning and maintenance of the instruments have to be done regularly. It's also important for the crew to know the ecosystem they’re working with, since some special features might affect measurements, such as the amount of dust in the air. “We have so many filtrations in our equipment that we have to change and clean. It’s a constant adaptation process between the devices and the ecosystem.”

Adaptation seems to be a key concept for the team in general, as new crops require learning and adjusting measurement methods every year.

“We are in our third crop rotation so we are still collecting experience. The sunflowers next year will be super cool, but horrible to sample and harvest,” Jean Pierre laughs. “We have to collect 300 sunflowers so even harvesting them will be a challenge”