Digging for data – a look into fieldwork at an ICOS station 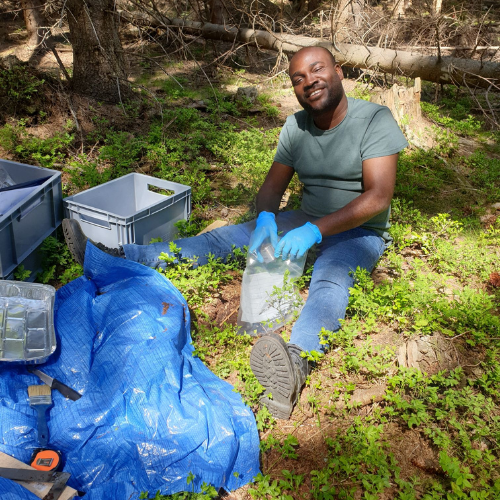 The summer months are the busiest time for fieldwork at many of the ICOS stations. What’s it like doing fieldwork? And what kind of research can you do with the collected data? Caleb Mensah and Khue Vu from a forest station in Czechia explain.

Bily Kriz is an ICOS Ecosystem station, located in the southeast of Czechia in a very mountainous area. The forest is predominantly spruce, and because of its location high up in the mountain, the climate is very cool and humid. Compared to other spruce forest stations in Czechia, the forest is also quite young – only 35 years old.

Bily Kriz is one of ICOS's 87 Ecosystem stations around Europe. The station employs around 10 people, who collect soil samples in the field to be analysed later in the labs. One sample is equal to 1kg of soil, which needs to be carefully separated into soil, roots, and stones. The most information can actually be found in the roots, which are weighed to find out how much carbon the root has absorbed from the soil. The heavier the root, the more it has absorbed carbon.

“For the separating, we use our hands and a brush,” says PhD student Khue Vu, who joined the station in March to help out with soil sampling. “It takes a lot of effort to separate all the samples, and a lot of time as well: around an hour to separate 1kg of soil.”

“Collecting samples usually takes around 2-3 days, from morning to evening,” explains Caleb Mensah, who was supporting the management of the site as part of his PhD training with CzechGlobe. “We start, for example, from the top of the mountain and then move downwards towards the station. The station gets coding from the ICOS Ecosystem Thematic Centres, which basically makes sure that all the samples are collected in a standardised way.”

The station PI works closely with the ICOS Ecosystem Thematic Centre, which Caleb Mensah finds to be an extremely good working model.  “ICOS does a fantastic job of managing the stations and giving the stations all the technical help they need.”

The Bily Kriz station has quite an important place in Caleb Mensah’s everyday life – and his research. His PhD thesis compared fluxes of carbon across three different forest sites.

“Spruce, in general, is very sensitive to droughts, but what I found was that the old forest site at Rájec was more affected by them than the younger forest (within a mountainous area) found here at Bily Kriz. This was mostly due to the humid climate and the larger water supply.”

Caleb Mensah is currently in the process of setting up an eddy covariance station in a tropical forest in Ghana that will monitor greenhouse gas exchanges between the atmosphere and the forest. The station is built in collaboration by the University of Energy and Natural Resources, Sunyani-Ghana, and Czech Globe, which provides the station with visiting technicians and equipment. Caleb Mensah will be the Principal Investigator of the new station.

“It’s critical to understand the carbon sequestration capacity of African forests to mitigate the consequences of climate change.”