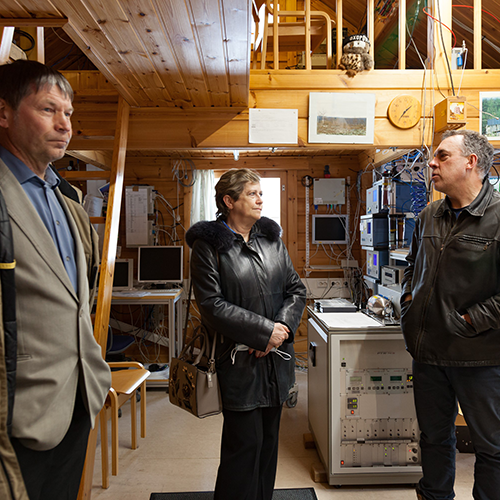 At the invitation of Her Excellency Agnès Cukierman, Ambassador of France to Finland, a delegation of 14 Ambassadors of European countries got a first-hand view on top climate science and the science collaboration on the field, while visiting a forestry research station at Hyytiälä in the middle Finland. The visit is part of the French Presidency of the Council of the European Union, and aims to celebrate, encourage and raise awareness of European scientific collaboration to tackle climate change.

Climate action and climate mitigation are part of the core programme of the current French Presidency. Field research is crucial for creating solid policies: the environmental field data, once analyzed, helps in assessing the implemented policies and creates a science-based ground for future decisions that will impact the lives of millions of people.

Climate research: the first link of the chain towards climate action

Located just North of Tampere, the Hyytiälä station is one of a kind: it is a flagship field platform where researchers from Europe and beyond unite their efforts and work together in a bid to better understand and find solutions to our current climate issues. "The Hyytiälä station is a paramount example of a platform fostering cross-disciplinary projects, where research infrastructures can interact, and deliver excellent science. It’s a good representative example of what we can accomplish together when we have a common goal," stated HE Agnès Cukierman, Ambassador of France to Finland.

The station operates all year-round, with a large number of international visiting scientists.

Hyytiälä, a unique platform for scientific collaboration in Europe and beyond

Originally used as a national facility for field studies, the Hyytiälä forestry field station has raised through the years to play a prominent international role in data harvesting and scientific collaboration on climate change studies: in 1986, the station was involved in tracking the effects of the Chernobyl incident and in 2010 it played an important role in monitoring the consequences of the Eyjafjallajökull eruptions.

Part of the uniqueness of the Hyytiälä forestry field station lies in its cross-disciplinary structure, where atmospheric sciences meet the chemistry and forest sciences. More than 1,200 parameters are measured at Hyytiälä, including monitoring the flow of greenhouse gases and other substances from the forest and lakes to the atmosphere. The data produced at the station undergoes a strict quality control process and is made available for free to anyone, anywhere in the world through data platforms such as the ICOS Carbon Portal. These data portals are crucial to better understand climate issues and can be used to create more accurate national greenhouse gas inventories all around Europe.

More information about the research infrastructures: