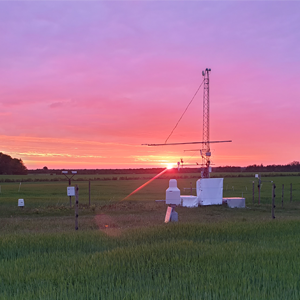 Ten more greenhouse gas measurement stations have passed the rigorous ICOS quality assurance process for standardised data production. The newly certified stations are located in six out of thirteen ICOS member countries. They include three stations in Germany, two in Belgium, two in France and one station in Denmark, Italy and Norway.

Voulundgaard ecosystem station located in the middle of an agricultural field was the first Danish station that passed the ICOS certification process. The station at Voulundgaard has been in place since 2008, which allows scientists to see how, for instance, the increasing amount of CO2 in the atmosphere, and the different land management practices affect the crops. “We can also study how these last extremely warm years affect the crop development,” says Thomas Friborg, the leading researcher of the station.

Digging up 30cm of soil to preserve instruments from being ploughed

Having a research station in the middle of a cultivated field brings all kinds of challenges to the scientific work, “For example, the farmer ploughs the soil twice a year, in spring and in autumn, which of course would break our soil meteorology instruments dug some 30 centimetres deep in the ground, if left there. So, after some experimenting, our technician, Lars, figured out a system that allows us to dig the first 30 cm of soil – and our instruments – up from the ground before the ploughing takes place. And replace afterwards, in a relatively easy way”
It took the team from University of Copenhagen about 1.5 years to get Voulundgaard station to pass the class 1 certification. The process is laborious because all ecosystem stations follow the same measurement methods and collect a lot of data in an accurate way. They follow, for example, how much the crops and other plants grow through the season.

Thomas Friborg says that collecting the data in the agreed way is very important, “Usually scientists have differences in the measuring equipment and in their methodologies. This makes it really difficult, if not impossible, to compare the data from the different researchers or research stations. And then your results can be off because of that. ICOS is so valuable because the data from different stations is of high quality and comparable, since we all comply with the same standards.”

ICOS has close to 150 stations on sites across Europe, with the number of stations growing each year. The ICOS data helps to reveal the carbon emissions and sinks on a European level. The data is used by scientists, like Dr Friborg, who seek to understand how the Earth operates. Moreover, it is utilised by various governmental bodies and international organisations that need science-based information on greenhouse gases in taking actions to mitigate the consequences of climate change.

After these recent certifications, altogether 68 measurement stations have passed the process for standardised greenhouse gas measurement. The data can be accessed openly and freely at ICOS Data Portal site.

Stations having received the ICOS label in November 17, 2020

Warm congratulations to the personnel working in the recently labelled stations, and to the institutes responsible for the stations!