Little green algae are big in the Arctic: A Q&A with a sea-ice expert Janne-Markus Rintala on recent Nature Climate Change article 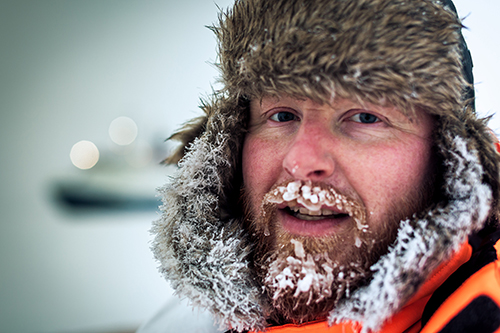 What are the cracks of knowledge on the Arctic sea-ice? What part does the sea-ice play in climate models? What makes little green algae inside the ice so important to the whole Arctic?

Recent study published in the Nature Climate Change scientific journal shows that the loss of the Arctic sea-ice due to climate change will lead to dramatic changes in climate processes and biodiversity. According to the study, the current lack of inclusion of sea-ice associated biogeochemical processes into climate models is worrying. The study urges for further research to inform future decision-making and climate modelling to better mitigate climate change.

The study was done by a team of international sea-ice experts of the research community Biogeochemical Exchange Processes at Sea-Ice Interfaces (BEPSII) from over 30 countries. One of the experts involved is Dr Janne-Markus Rintala, who is a Science Officer at the ICOS ERIC Head Office and a Visiting Scientist at the Institute for Atmospheric and Earth System Research (INAR), University of Helsinki. Read what Janne-Markus replies to the questions about the study:

Hi Janne-Markus, could you tell how did you end up as a sea-ice expert?
J-MR: Well, I got interested in the ice at the university while studying biology. My teacher at the time was very encouraging and took me to my first Antarctic exploration at the Ross Sea which was amazing. During the years, I became more and more astonished of how much attention was paid to the toxic blue-green algae in summer time, while nobody was interested on what happens to algae in other seasons. I decided to find out. Finland had great conditions to study sea-ice since the sea had usually been frozen during the winter. So I headed to the Baltic Sea for my PhD to study algae that thrive inside the sea-ice there. So, I’d say I became a “sea-ice expert” during my PhD studies.

How is this study different from the studies that have been done before on the Arctic sea-ice?
J-MR: This is the first, exceptionally wide study with a large number of experts that give their opinion on the research done so far on the Arctic sea-ice. Our conclusion is that there is still not enough information on the sea-ice. For example, there are data on the sea-ice only from certain time of the year, which means that the data do not cover other parts of the year. Also, the study points out that the sea-ice is not same everywhere in the Arctic, since its age can vary in different places of the region. This is important to remember when talking about the research done on the Arctic sea-ice.

What part you had in the study?
J-MR: I contributed especially to the part about algae as well as protists. Writing this article showed me that only a handful of people are able to recognise different species of algae. Often these experts are interested in one group of algae instead of a wider ecological perspective; a bigger picture that includes the whole ecosystem and interactions within. I was excited to be part of the study and I was happy to do it on my spare time.

What do you think are the most important findings of the study?
J-MR: It’s no news that life exists inside the ice – this has been proved over and over. But still, in spite of that, the sea-ice is still not included to climate models and global carbon budgets. Currently, climate models are way too simple, they can’t handle for example hundreds of different species of algae. I think this is the most important remark of our study and I hope it will be heard. Also, we don’t know the ecology of the species in the sea-ice well at all, instead, all are pushed into the same category no matter if they are in active or inactive form. In a way, anyone who wants to see the bigger picture has to put up with a lot of compromise and imperfection, including me.

Why sea-ice hasn’t been included into climate models?
J-MR: Scientists who identify species, so-called taxonomists, do not generally communicate well with the modellers and vice versa. Sea-ice biologists, especially taxonomists who collect field samples and do detailed species analysis, often gather data that is not suited for modelling purposes. BEPSII group has really done amazing job in getting these two different disciplines together to improve their communication, which is needed already in the preparation stage of any field campaign.

The article says that the Arctic sea-ice is expected to continue to become thinner, younger and less long-lasting. What are your thoughts on this, can the dark future be still reversed?
J-MR: The Arctic sea-ice will change, no matter what. The sea-ice is already much more porous than it has been before. The proportion of the multi-year sea-ice will decrease significantly whereas the first-year ice will increase. The sea-ice will cover a much smaller area of the sea surface. If you look at Finland’s temperatures, the average temperature has had increased already 2 degrees within the last 100 years. I don’t see that these changes will bring anything positive. I believe that we are the last generation that can have an impact, by doing more research on relevant topics, for example. We have seen hundreds of millions poured rapidly into science to tackle the Covid-19 virus, so it’s more about whether the funders have enough will-power or not.

The study urges for further research to be done on the Arctic sea-ice. What kind of research would you like to see to be done? What kind of knowledge is needed?
J-MR: First of all, winter shouldn’t be viewed as an entirely dead season. We have been used to seeing the sea-ice as this huge solid white sheet that covers the sea surface. This is not the case and even every sea-ice sample is different: two samples taken five metres apart are most likely very different from each other. In case of ice algae, there are still many species that haven’t been properly identified. Due to lack of knowledge, we are prone to make hypotheses based on the most dominant species of algae although the less dominating species may well be important in regulating algal communities.

It would be nice to see more research done in mixotrophy, because it’s something that is still poorly understood. A mixotroph is an organism that can be both a plant and an animal, it can use photosynthesis but also prey on other algae, bacteria, and protists even biggen than themselves or utilise carbon by slicing macromolecules. In ICOS, we speak about “lateral carbon flow”; flow of carbon between the atmosphere, the land surface and the oceans. Similar carbon flow, but between different organisms, could be observed within the plankton ecosystems by using mixotrophy. This type of research would be revolutionary and change the way we think about the oceanic ecosystems that are not in direct contact with a shore nor the bottom. But doing this type of research would be extremely challenging.

What do you think greenhouse gas research should take home from this study?
J-MR: It would be nice to see that the sea-ice had an actual value, not just a “zero” value, in global carbon budgets and climate models. Since ice algae exist and are active, it would be interesting to know how much carbon dioxide they can take in from the atmosphere. Or, whether the sea-ice could become a source of carbon, for example, when bacteria inside the ice starts to grow and reproduce more efficiently. This can happen when photosynthesis of ice algae is not possible because snow cover is blocking the light or even worse, when the surface water gets overly nutrified and feeds both bacteria and algae.

I would also red-flag changes of species that are mainly responsible for biological carbon pump and carbon transport in the sea floor. These processes are changing e.g. because diatoms (a major group of algae) sink faster into the bottom of the ocean during spring bloom than other types of algae such as flagellates, meaning that diatoms will transport more carbon to the sea floor. If flagellates become the most dominant group, then this carbon transport is most likely significantly hindered.

How about what kind of actions would you like to see decision-makers to take based on the study?
J-MR: I’d like to see more support going to biological research of microbes. It is much easier to find funding for polar bears or Arctic fish stocks, yet, it should be equally important to protect the microbes (bacteria, algae and protists) that play a significant role providing the entire basis of the food web. These little green or brown coloured algae might not look like something important but they are significant not only during spring bloom but throughout the season and even small changes in them are likely to cause cascading effects to other levels of the food chain. The Arctic sea-ice is different everywhere, it’s a mosaic in biological sense with lots of different biological habitants and functions. Impacts that look small from a global perspective might lead to irreversible changes because of biodiversity loss.